Skip to content
Flying in the blue painted blue

Happy to stay up there… And I flew, I flew happily higher than the sun… And even more on…
As the world slowly disappeared far down there

The path continues in the recent and important knowledge on the male component of the hive that has always been not only misunderstood and denigrated, but even often hindered both in reproduction and in its indispensable role. Drones that, in the previous article I also called, with deliberate, provocative and reductive simplification, spermatozoa with wings. Of which I have shared and proposed aspects, which require their evaluation, confidence and esteem: behaviors, phases, conditions, difficulties in their maturation and sexual efficiency, timing of their first orientation flights, types of approach to gathering areas – DCA -, predilection to perform their function near the colony of origin.
But on one aspect, the peculiarities of their flight activities, I have limited myself to mentioning the remarkable speed – 30 km / h – while their motor skills are a key and fundamental aspect of the entire biological cycle of bees. Flight, the foundation of the specific ethology of drones, of which we finally begin to know and understand part of the hitherto arcane characteristics. Capacity of the male component that alone should lead us to relocate, in the right scale of importance, what until recently was shrouded in an aura of mystery and substantially despised for its apparent uselessness; and that instead, in the light of recent discoveries, plays a crucial role in understanding the evolution and genetic specialization of bees, to measure up and try to develop effective reproduction strategies, with new consideration of the complex biology of the animal we raise.

There are two types of flight of the male component of the bee colony: those of young drones , short flights, defined as “orientation” and those of longer adult males , defined as “fertilization” flights, to attend the gathering areas – DCA – (Witherell 1971, Currie 1987). The first orientation flights are carried out around 6/9 days from birth; they are functional to the recognition of the territory surrounding the hive, to train and refine the flight skills, to improve the performance of return to one’s nest (Capaldi 2000). The drones perform an average of 8/9 orientation flights during their life (normally 3 per day), lasting approximately 15 minutes each, first in the immediate vicinity of their hive, and then moving away, but generally limited to a few hundred meters from the apiary of origin. It has been verified that drones that devote more time to orientation flights, then demonstrate a longer residence time within the DCAs (Capaldi 2000). Orientation flights therefore play an important educational and learning role.
As well as the bees, part of the drones also dies in the field and therefore does not return from the flight. The study found that between 70 and 80% of males return to their nest (Reyes 2019). The drift in other colonies on return from flights is very limited, unlike a widespread preconception, the drones generally remain faithful to their hive. 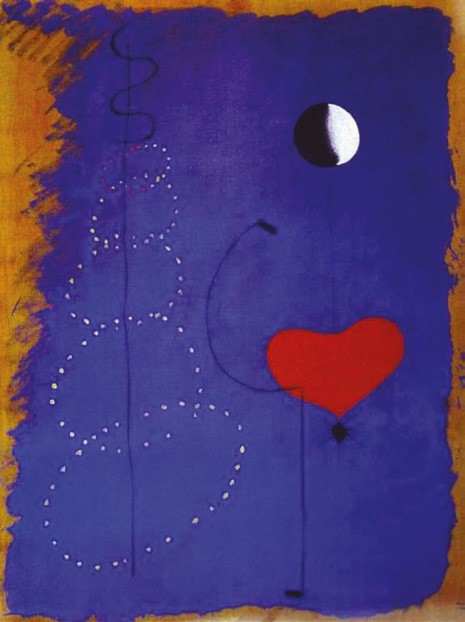 About a week after birth the drones make several orientation flights of about 1/4 of an hour, first nearby, then a few hundred meters from their hive 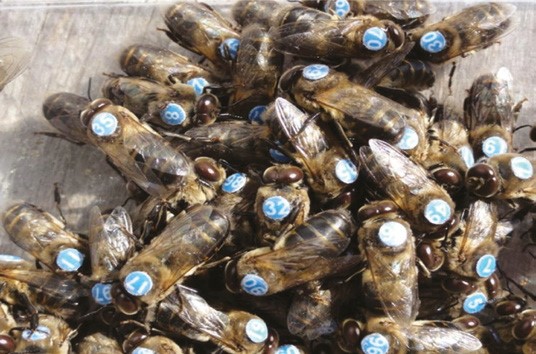 Following the effort dedicated to orientation flights, there is a substantial period of inactivity ranging from 5 to 12 days (depending on the seasonal period), in which the drones remain inside their hive until the age of 21 days in spring and 14 in summer.
The drones then begin to perform the first fertilization flights, which have an average duration of 30 minutes each, from 2 to 5 flights a day, for a total that varies from 14 to 22 fertilization flights throughout the life of a drone. The drone can visit several DCAs in a single day (Ruttner 1966) and between flights it rests in the hive and “recharges”, eating honey (Currie 1987). The time spent inside the hive between one fertilization flight and another is between 3 and 4 minutes; while the total duration of stay in the DCAs (estimated on the total duration of the flights) is 510 minutes in spring and 327 minutes in summer.
The flight activity of the drones is strongly conditioned by: weather, temperatures, time and season. Generally they begin to fly in the afternoon, between 2 pm and 6 pm, with a peak of activity around 4 pm, the flight period then, in summer, extends by 3 hours compared to spring; flights were also recorded, with favorable weather, in the early morning, from 7 to 9 and late in the evening, from 19 to 22 (Fukuda and Ohtani 1977). The minimum temperature for satisfactory flights, for duration, radius etc … is 19 degrees.
Drones are also extremely sensitive to high temperatures; in the summer period there is, in fact, a considerable loss of longevity of the drone resulting from: increase in flight activity, extreme weather conditions and stress of the colony. The maximum age of a drone recorded in summer is 23.5 days compared to 33 days in spring (Wintherell 1972). Moreover, with a wind above 30 km/h, drones (of any age) rarely venture out of the hive: in such conditions there are very short flights in the immediate vicinity of the hive, but of “purification” (Page and Peng 2001).

Throughout his life a drone dedicates a few hours, about seven, between orientation flights and flights in the areas of gathering, both to “learn” and to participate in the fertilization scrum of the virgins 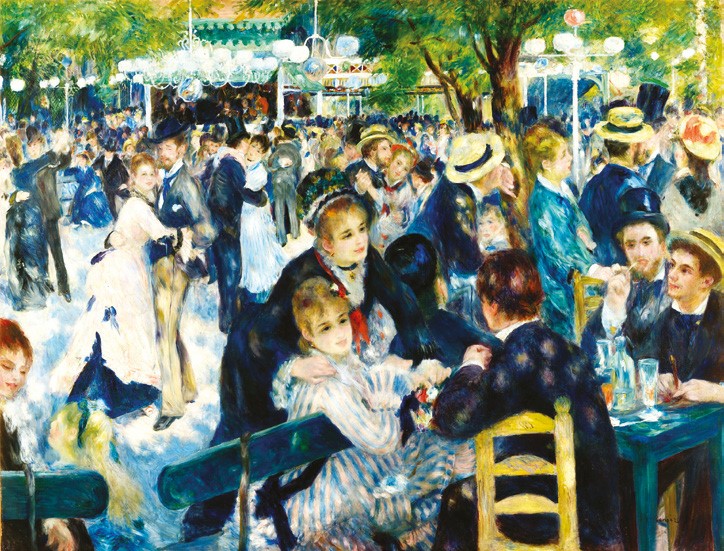 A recent and very interesting scientific research of 2019 by Maritza Reyes and others, began to represent and describe what until recently was shrouded in an aura of mystery and which is instead crucial to try to better understand the reproduction of bees, and then try to measure themselves to develop effective breeding and breeding strategies; this starting from a different consideration of the biology of the hive, in particular of how much the flight activity of the drones affects mating and reproduction. The study was conducted over an entire season with the use of a high-resolution camera, with an optical reader that recognizes specially marked drones, and monitors their activity in and out of the hive, with the return of extremely precise data and… Amazing. The average total duration “away from home” of a drone in spring is between 7 hours and 37 minutes and 6 hours and 19 minutes in summer. While recording in two years of study, ascertained which total number of orientation and fertilization flights in the life of a drone, from 20 to 27, with an observed maximum of 106 and a minimum of 1: this is also because in spring 48% and in summer 19% of drones do not live long enough to be able to carry out fertilization flights.

The closer the better

Although the presence in the gathering areas – DCA – of drones from colonies located 5 km away has been recorded (Ruttner 1972), and although it is 2 hours and 51 minutes the longest flight of a drone ever recorded, from exit to return to the hive (Reyes 2019), all the scientific research aimed at determining the distance of the gathering areas from the hives of origin of the males are in agreement and have shown that these are placed primarily within a radius of 200 m to 2 km, with a strong prevalence of a radius from 200 to 400 meters (Koeniger 2005, Galindo-Cardona 2012). A drone visits numerous DCAs during his life: he “trains” to compete in the fray in fertilization comets. Establishing yourself in “pole position” depends on: speed, sprint, sufficient “fuel”. In general, however, he chooses for reproduction those closest to his hive (Koeniger 2005). On the other hand, the average duration – 30 minutes – of fertilization flights (from when the drone leaves to when it returns to its hive), confirms that the distance of the DCA chosen by the drones is normally between 200 and 800 meters from the colony of origin (Reyes 2019, Galindo-Cardona 2012). 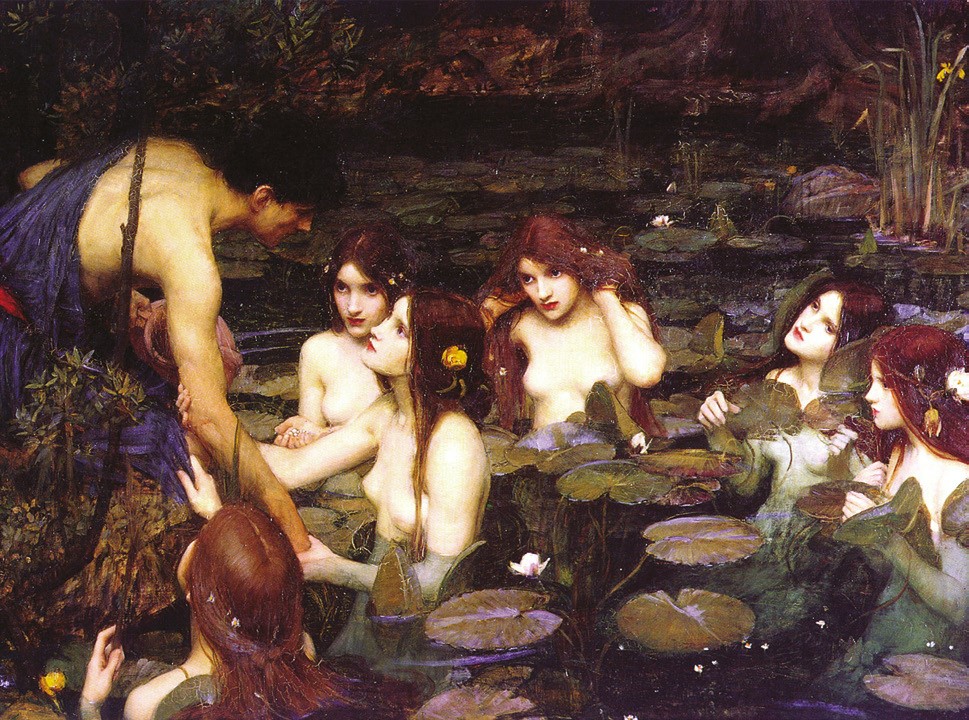 Generally the maximum distance from the hives of origin covered by the males, to participate in the gathering areas, is 2 km, with a strong preference for those at a maximum of 400 meters

This is for obvious and concomitant possible reasons:

1. the priority of “energy saving” such as to allow to prolong the time spent in the DCAs and maximize the chances of placing oneself in a dominant position in fertilization comets,
2. drones (like bees on the other hand) orient themselves better and are more able to recognize differences and variations in the horizon line within a radius of 200/400 m from their hive.

These very interesting scientific data therefore offer us a possible and peculiar genetic characterization of the colonies that insist in a territorial area, related to the distinct aggregations of drones of the same area. With therefore possible, appreciable, interesting if not precious genetic differences between sets of bee colonies (populations often developed – one has reason to believe – with interaction of inputs from the environment and from zootechnical management) and respective and different DCAs (Koeniger 2005).

Horizon line: it is the apparent line that separates the sky from the earth, which divides all the visible directions, those that intersect and that do not intersect the earth’s surface 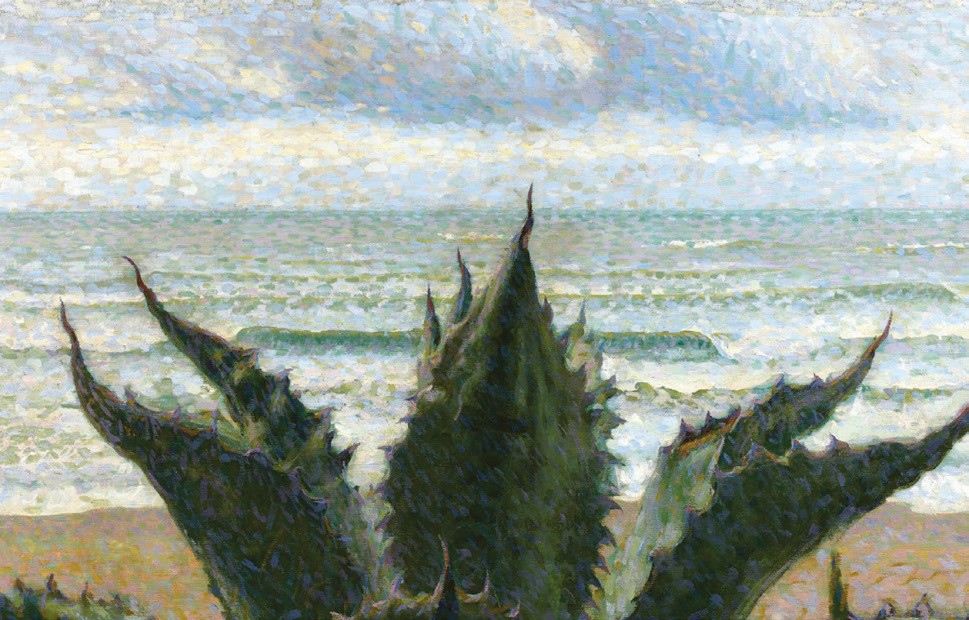 The specific characteristics of flight activity of the drones are one of the cornerstones of the reproductive peculiarities of the Apis mellifera. Particularities that facilitate adaptive genetic declination of bees and therefore the considerable spread of the species in such different environments of the planet. Today, as never before, both the bee and the environmental contexts in which it survives, are subjected to new and epochal pitfalls and transformations.
Relocating the role and biological relief of drones is one of the keys, as we will see, to try to develop possible and effective breeding, reproduction and selection strategies. In the reproduction of bees it is time to try to go beyond the limited and more than doubtful anthropocentric approach, to try to update the zootechnical management, so that we also make use of the ability of the drones to make … what they can do… very well!

The other half of the sky

This website uses cookies to improve your experience while you navigate through the website. Out of these cookies, the cookies that are categorized as necessary are stored on your browser as they are essential for the working of basic functionalities of the website. We also use third-party cookies that help us analyze and understand how you use this website. These cookies will be stored in your browser only with your consent. You also have the option to opt-out of these cookies. But opting out of some of these cookies may have an effect on your browsing experience.
Necessary Always Enabled
Necessary cookies are absolutely essential for the website to function properly. This category only includes cookies that ensures basic functionalities and security features of the website. These cookies do not store any personal information.
Non-necessary
Any cookies that may not be particularly necessary for the website to function and is used specifically to collect user personal data via analytics, ads, other embedded contents are termed as non-necessary cookies. It is mandatory to procure user consent prior to running these cookies on your website.
SAVE & ACCEPT
Go to Top